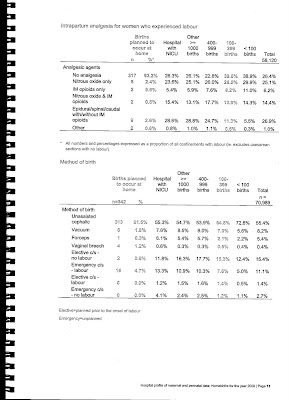 The two pages copied above are from the Victorian government's perinatal data statistics unit, which is part of the Consultative COuncil on Obstetric and Paediatric Mortality and Morbidity (CCOPMM). The publication is:
Hospital profile of maternal and perinatal data
Homebirths for the year 2008

Each hospital receives a copy, and homebirth data are aggregated into a virtual 'hospital' for statistical purposes.

These data are not published on the internet, but are sent to each Victorian maternity hospital, and to independent midwives who provide the data.

This report, for the first time, "reports on all births that were planned to occur at home, regardless of whether they actually occurred at home or in hospital. Previous Profiles reported only on outcomes for achieved home births. This new format will provide more useful information, for example for informing women who are considering homebirth." (page 2)


These data refer to women attended privately by independent midwives in Victoria, as the publicly funded home birth pilot program commenced in 2010. The following information has been selected from the Homebirth 2008 Profile, for interest of readers of this blog: 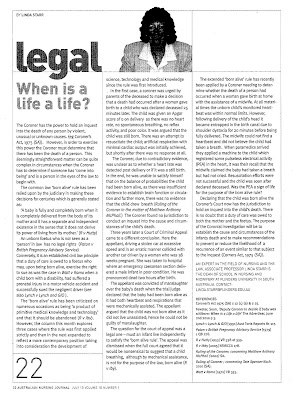 Of all the maternity care statistics, life, and death, are absolutes.  Our society has an expectation of good outcomes for all births, particularly those which take place in homes.  Midwives rightly face scrutiny if anything goes wrong.

The article copied above refers to an important question: When is a life a life?, published in the Australian Nursing Journal, Vol18 No1, July 2010, page 22. This article refers to the Coroner's involvement in investigating the birth and death of baby born at home in South Australia.  The case has been reported in the public press, and the midwife has written publicly about aspects of the case.

The loss of life of a previously healthy baby in any circumstances, born or unborn, is a tragedy.  The midwife's duty of care is the promotion of the wellness and safety of both mother and baby.  However, there are some emergencies that can arise, regardless of the place of birth, which unfortunately lead to death or serious damage.