Petition by iPetitions
Posted by Joy Johnston at 2:47 PM No comments:

The Proposal to Protect Midwifery Practice in South Australia Consultation Paper (PDF 98KB) (opens in a new window) seeks comments from stakeholders and other interested persons on the proposal to legislate for the restriction of midwifery services in South Australia to a registered midwife or midwifery student acting under the appropriate supervision of a registered midwife.

Submissions will be received up until 5.00 pm, Friday 1 March 2013 and may be forwarded by:

APMA will submit a response and we would appreciate comment from midwives who have an interest in the matter, as well as families or others who may be impacted by the proposals.


The story of Dr. Geréb is one that has been played out in the Hungarian criminal courts for the last two years. On December 6th a further phase commences, when she will face a new set of five charges before one of the criminal courts in Budapest.

As you are probably aware Ágnes has been detained without trial since a birth incident of Oct 5th, 2010 (prison, 77days; house arrest, 710 days and counting!). In February this year she was sentenced to two years imprisonment connected to birth incidents occurring in 2006 and 2007. However, the enforcement of this sentence is still pending as the President of Hungary ruled on October, 10th (see his translated statement at http://www.szuleteshaz.hu/en/press-releases-of-the-clemency/) that Ágnes's request for clemency in this matter will not be decided upon by him until the December, 6th trial charges have reached a conclusion in the courts. This upcoming trial will deal with the birth incident of Oct, 5th, 2010, two further birth incidents and also two "administrative" matters.

The Campaign for Justice for Dr. Geréb would very much welcome your involvement and coverage of this new trial as it continues to raise issues around the situation of Ágnes which we consider important for her but also for the rights she is fighting for:
On December 6th it's her own rights which will first and foremost come under further intense pressure as she continues to deal with:
President Áder in his statement of October 10th acknowledged Ágnes's role in helping birthing mothers and home birth itself. This was an important positive comment for Ágnes coming from the highest office holder in the land but it needs to be built upon by receiving the backing of the Hungarian government as well. The President also highlighted the important place of justice and lawfulness in Hungary and to echo this vital point Dr. Geréb supporters both at home and abroad will be calling on the Hungarian government, through the Minister for Justice to review her case and also to closely monitoring her upcoming trial.

We know from our feedback that Ági's story has captured the attention of women everywhere and also of the many interested in human rights. If readers are in a position to move further on this story please let me know and I can provide u with more information on the 5 cases involved and I know Ágnes would be available to reply to written questions that u might wish to put to her.
Yours sincerely,
Donal Kerry
International Spokesperson
Campaign for Justice for Ágnes Gereb
mobile 0036309242190
email: donalkerry@hotmail.com

This message was received through Beverley Beech of AIMS UK.
Posted by Joy Johnston at 9:14 AM No comments:

Review of the ACM Guidelines 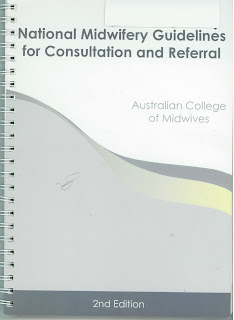 The College (ACM) has announced a review of the ACM National Midwifery Guidelines for Consultation and Referral (2nd Edition) (2008)
If you do not have a copy, you can download a .pfd version here.

Readers who are members of ACM will have received a message about this review.


"Endorsed as qualified to prescribe schedule 2, 3, 4 and 8 medicines required for midwifery practice across pregnancy, labour, birth and postnatal care, in accordance with relevant State and Territory legislation"(AHPRA)


Readers are welcome to make comments in relation to this review, either directly to ACM, or via APMA.
Posted by Joy Johnston at 5:35 PM No comments:

Australian Health Ministers met in Sydney today for a meeting of the Standing Council on Health (SCoH).  The meeting was chaired by Dr Kim Hames, WA Minister for Health.

The Commonwealth agreed to vary the determination on collaborative arrangements to enable agreements between midwives and hospital and health services.

Ministers agreed that WA would develop a paper on longer term arrangements and that this would be presented at the November meeting of Ministers.

[This message has been copied from the SCoH Communique.]

taking midwifery to the mothers

A blog announcement by Toowoomba's My Midwives

... we are commencing a midwifery service at Grand Central.  My Midwives will be in the Level 2 Parents Room every Wednesday morning between 9.30am – 12.30pm. Our accredited midwifery staff will provide a range of services including antenatal information and advice, blood pressure checks, education for women and comprehensive post birth checks for mother and baby up to six weeks after birth. These services are available as Medicare bulk billed visits. [Note: You must be pregnant or have a baby no more than six weeks old and hold a current Medicare card to receive a bulk billed service.]

Congratulations, My Midwives.
Posted by Joy Johnston at 7:27 PM No comments: